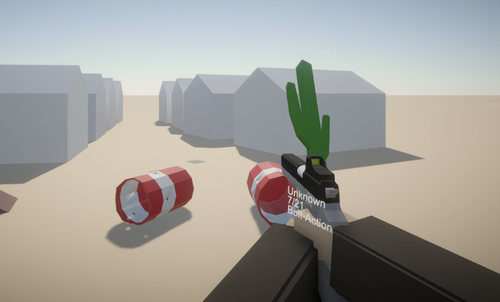 Devblogs will be used to talk about what has been worked on, what will come, and how things are going.
Currently, I have a small checklist of things to get done as has been posted on my Instagram

The past few days and continuing through the current week,  my time has/will spent working on the weapon mechanics of the game.

I have been focusing on the M1911A1, one of the first weapons that can use CQC.  Currently, the jab motion is broken as the weapon sway messed with hierarchy, breaking the animation. But with that aside, important features for realism + gameplay features have been added, such as dry fire when out or in safety and reloading. The bullets previously just came out infinitely as fast as you can click and with no end. Now, there is a fire rate that a gun must abide by. Currently, I don't know weather to use a magazine system or a per bullet system. But as there will end up being looting within the near future, I feel the per magazine feature will better suite a game of this style. This will just require some more complex code, but it wouldn't be too hard. Lastly, weapon customization can be seen as the weapon has an Red Dot sight equipped instead of the usual iron sights

(UI is for debug purposes, to see if the true attributes are applied. An M1911A1 is far from being bolt action)

Join the ranks as a PMC soldier using weapons procured on site!